Flamemaster’s story began in 1942, when a company known as Dyna-Therm Chemical Company was founded as a research and development firm in Culver City, California.   Dyna-Therm worked with companies such as Litton Industries and Hughes Aircraft, as well as the U.S. Government, developing products for defense applications.  These successful partnerships allowed the company to expand into a 14,000 sq. ft. facility, previously occupied by Matthew’s Paints in Los Angeles, in 1948.

Throughout the next several decades, Dyna-Therm developed an extensive line of products, including coatings for ablative and heat resistance for missile launch systems, aerodynamic thermal protection, and underground missile silos as well as fire and radiation protection of nuclear plants.   We take great pride in knowing that our products were used for vital programs such as the Minuteman and Blue Scout missiles and Thor Delta ground support equipment.

The company also played a key role in the fledgling space exploration and rocket programs with NASA.  Our coatings were used for various applications on the launch pad for the Saturn V – Apollo 11 rocket that took man to the moon in 1969.  These coatings performed so well that they continued to be used all the way to Apollo 17, the last mission to the moon.   Multiple products were used on Titan IV-1 launches, including the Viking Mars Lander and the two Voyager probes.

Additional products for earth-bound applications were also introduced.  These included coatings for drywall construction, waterproofing, and corrosion resistance.  Along with the materials described, many of these tried-and-true products are still in use today.

Although high-tech coatings were the focus in the early years, the company began developing sealants for aerospace applications in the late 1950s.   Sealants for fuel tanks, windshields, access doors, and faying surfaces soon went on the market as well as electrically resistive compounds.

A side note for architecture lovers:  The Chemosphere, the famous octagonal modernist house in the Hollywood Hills, has a strong connection to our business.  Chem Seal Corporation helped sponsor the building and provided experimental materials for it – and inspired its name!

In 1973, the company changed its name to Flamemaster Corporation and again expanded, this time into a 27,000 sq. ft. building in Sun Valley, California.   Through its innovation and dedication to problem-solving, Flamemaster has become one of the main suppliers of aircraft sealants for major airplane manufacturers and MRO markets, in both the military and commercial spaces.

In 2006, Flamemaster expanded once more into its current 54,000+ sq. ft. facility in Pacoima, California.  The increased space has allowed the introduction of additional mixers, filling equipment, and packaging lines.  Increased automation and addition of key personnel and helping to guide the company’s continued growth.

To take Flamemaster’s vast sealant manufacturing experience into new markets, we sought a strategic partnership that could open up new opportunities.  In September of 2019, Flamemaster partnered with Socomore, headquartered in France, to work together on next-generation aircraft sealants for major OEMs in both North America and Europe.

Socomore has now acquired a 22% stake in Flamemaster.   Our company will benefit from Socomore’s global presence, expertise in aerospace materials, and strong customer relationships to introduce our products in new markets, to strengthen our sales, and fully utilize our production capabilities.  It also gives Flamemaster access to additional R&D resources to help stay ahead of the ever-changing sealant market. This partnership marks an important milestone for the company, providing a large platform to continue our growth and create innovative solutions for the aerospace sealant market. 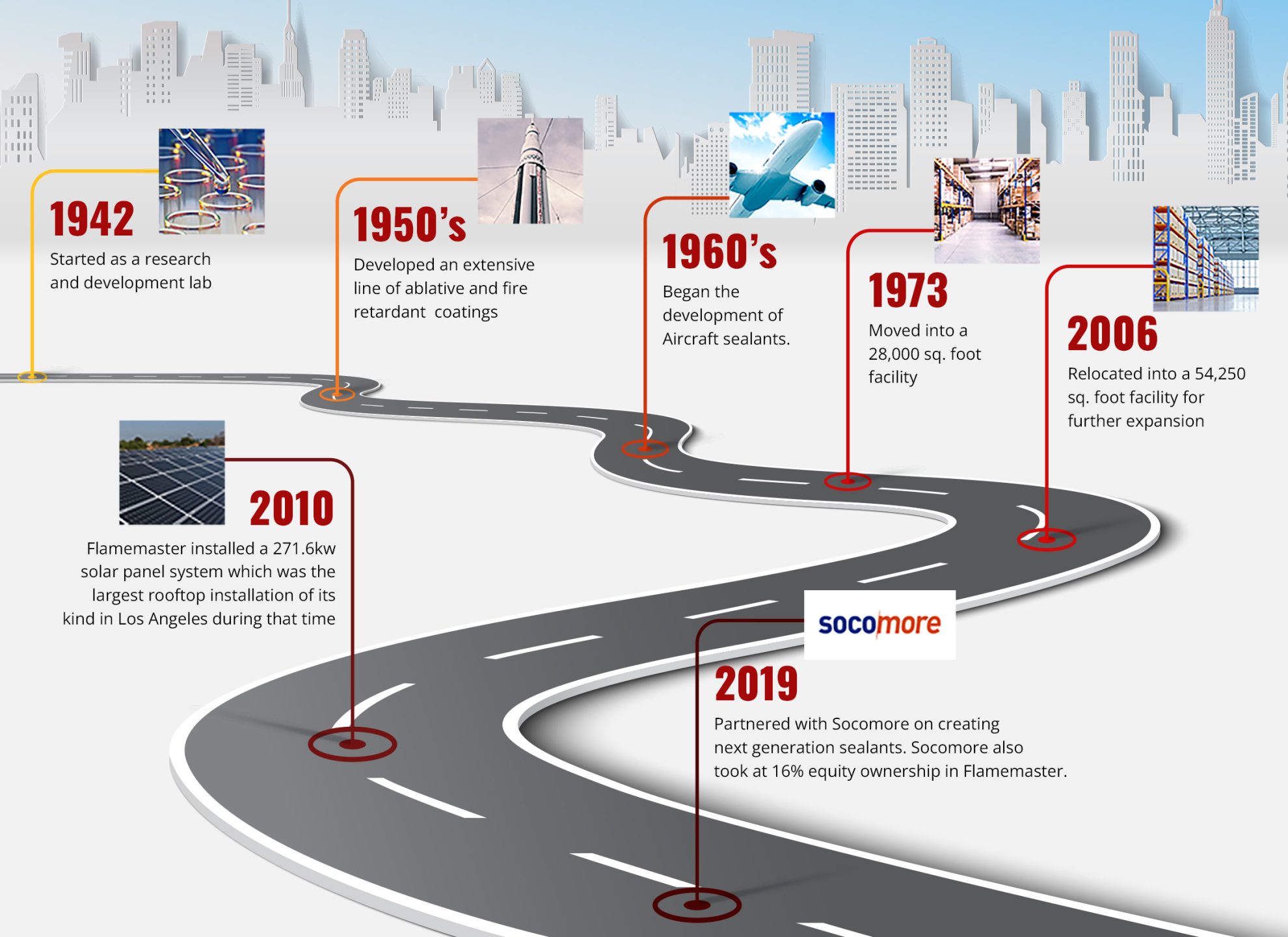